Back to the top
×

Jim Koehler & Avenger are headed to Las Vegas for the World Finals!

It’s official ! Avenger and Jim will compete in the 2018 World Finals !

“It is awesome to be a part of the last World Finals in Vegas! And to have been to every one of them is great! This is going to be a special year and Avenger fans don’t want to miss it! Thanks for being Avenger Fans!” – Jim Koehler 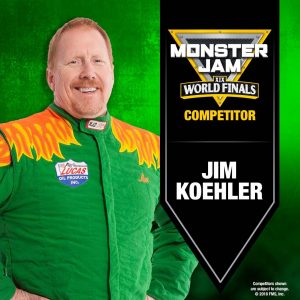 “Two-time champion Jim Koehler will continue his streak as the only driver to compete in all Monster Jam World Finals competitions. Koehler, winner of the 2003 and 2011 Freestyle Championships, recorded three Freestyle wins this season (Anaheim twice, Atlanta). In last year’s Monster Jam World Finals, Koehler raced his way into the Semi-Finals and backed it up with a third-place finish in Freestyle.”